Home Catalogue Ground application primed before and after cut

In the early years of the twentieth century Paul Signac visited some of Europe’s major ports, including Marseille, Venice, Rotterdam, London, La Rochelle, and, in 1907, Constantinople, today’s Istanbul. While there, he assembled his pictorial impressions in drawings and watercolours, some of which he later transferred to canvas in the studio, using his divisionist technique. The painting discussed here bears the title ‘Stamboul, Yeni Djami’, which together with his signature and the date 1909 he inscribed on the reverse of the stretcher. It was painted on the basis of a watercolour study which already depicts precisely the motif of the picture (fig. 13). Signac executed his painting on a commercially available canvas with a cream-white ground in the standard landscape format ‘Figure 25’, which, according to a label verso, he bought from the art supplies shop Lucien Lefebvre-Foinet in Paris (fig. 2). In order to lend his depiction the greatest-possible luminescence, he added a pure white ground, a measure he had already recommended in his treatise ‘D’Eugène Delacroix au néo-impressionisme’: ‘It is curious to note how, even in the smallest details of their techniques, the Neo-Impressionists have put Delacroix‘s advice into practice. For instance, they only paint on white grounds so that the light will reflect through the colours, giving them more brilliance and life.’ (Vitaglione 1985, p. T18; Signac 1899, p. 18; fig. 9). Part of the scene, such as the mosque and the sailing boat on the left-hand edge, and the rowing boat in the foreground, were drawn by the artist on the ground in pencil along with the line of the horizon (figs. 7, 8). The subsequent paint application, using the Divisionist technique, follows this underdrawing exactly; no further changes were made to the composition. With a regular rhythm, the individual colour strokes are placed next to each other, only partly overlapping, leaving gaps through which the white ground and also sections of the underdrawing remain visible. The direction of application of the impasto colour strokes – which, in line with the Neo-Impressionist colour theory were blended only with white and with the neighbouring colours in the spectrum – follows the motif in question (fig. 10). Fortunately the painting has never been varnished and thus retains the authentic matt surface character as intended by the artist. 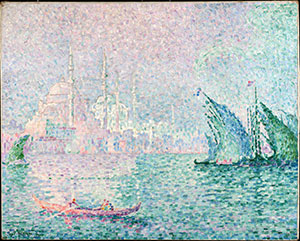 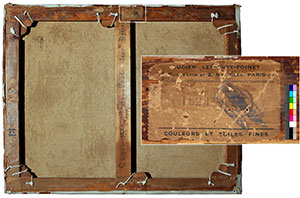 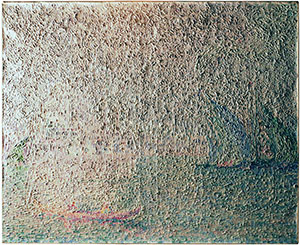 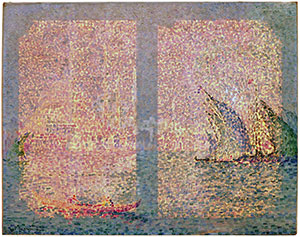 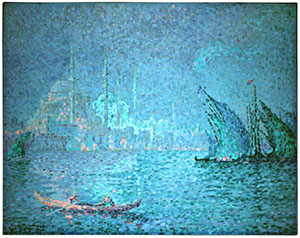 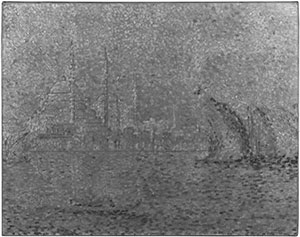 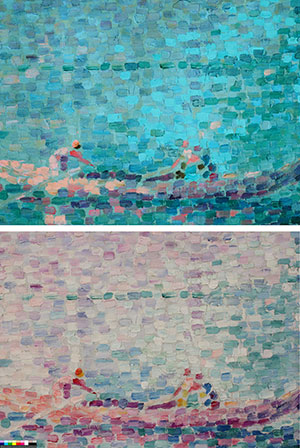 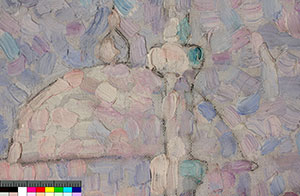 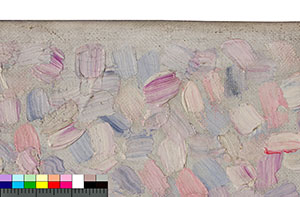 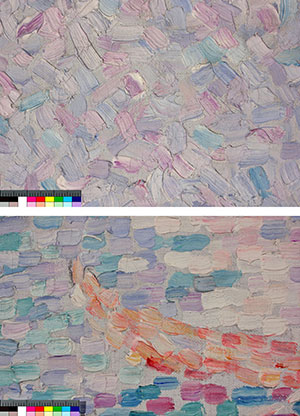 Details of the sky (top) and surface of the water (bottom), with different orientation of application and in places blending of the paints on the canvas itself 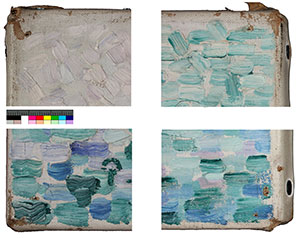 Detail of signature and date 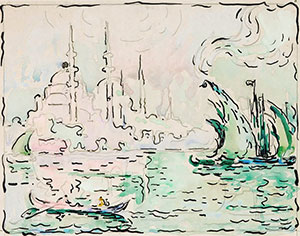