The Langlois drawbridge, named after its attendant, was one of Van Gogh’s favourite motifs in Arles; he depicted it in the spring of 1888 in a series of ten works using various techniques and from various perspectives. The Drawbridge in Cologne was painted on a white pre-primed canvas of the standard P 15 size (fig. 2). The fine, netlike cloth resembles the commercially available toile étude or toile pochade routinely used for studies at the time (fig. 11).

Particularly noteworthy in this painting is the detailed planning of the motif, which is structured in three stages: infra-red reflectography reveals pencil lines which create a framework in the form of a “Union-Jack pattern” (figs. 6, 7). This in fact lays down the contours of a known van-Gogh aid, which he himself described as a “perspective frame” (fig. 15). What this framework looked like precisely, and how the artist used it, is known from drawings and descriptions in letters to his brother Theo: “So on the shore or in the meadow or in the fields one can took through it as trough a window, the vertical lines and the perpendicular line of the frame and the diagonal lines and the point of intersection, or else the division in squares, certainly give a few basic markers, with the help of which one can make firm drawing, from the indication of the main lines and proportions - at least for those who have some instinct for perspective [...] Without this the instrument is of little or no use at all, and it makes one dizzy to look through it.” [LT 223, 5/6 August 1882]. Once the artist had found a suitable view, he evidently placed the frame directly on the primed canvas and outlined its contours in pencil. During the painting process, the frame itself was, according to a sketch by van Gogh, placed between the artist and the motif with the help of a couple of posts stuck in the ground [LT 222/254] (fig. 15). In this sense, the proof of the use of the frame can also be taken as an indication that the painting was executed en plein air. The use of this instrument could only be proved hitherto for twelve of his paintings in the Van Gogh Museum in Amsterdam, which all date from the spring and summer of 1887 [Hendriks 2005, p. 473].

The description “perspective frame” is misleading, at least for its deployment for the picture in Cologne, because in the composition no strict perspective rules were applied which are in any way oriented to the lines of the frame. Rather, the instrument served as a method for transferring the subsequent pencil drawing, in which he sketchily captured the contours of the bridge, the houses and a few figures. There then followed a very detailed India-ink drawing of the motif, which in many places was incorporated into the effect of the final picture (figs. 8, 13). In their manner and extent, the India-ink drawing resembles the subsequent drawing of the painting, also in India ink, which van Gogh enclosed in a letter to his artist friend Émile Bernard in July 1888 [F 1471, Van Gogh 2005, p. 250] (fig. 14).

The subsequent application of paint was executed briskly and largely wet-in-wet, so that we can presume just one or at the most two sittings. The dynamic brushstrokes and the use of the brush handle or ferrule as a scratching instrument created, in a virtuoso manner, structure and plasticity, including some highly impasto areas. 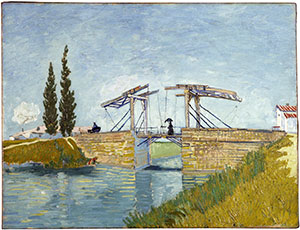 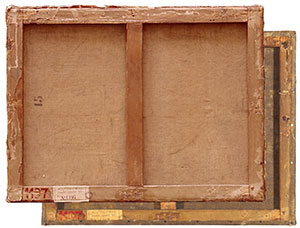 Verso, collage of the condition before the 1961 lining (top) and after (bottom) 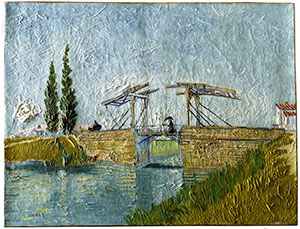 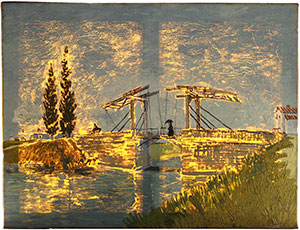 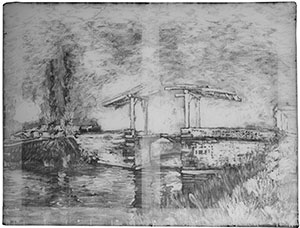 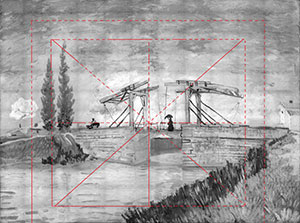 IR reflectogram with mapping of the perspective frame (red) 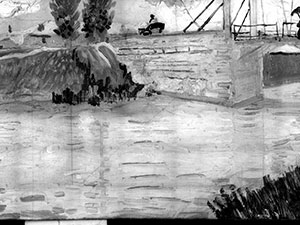 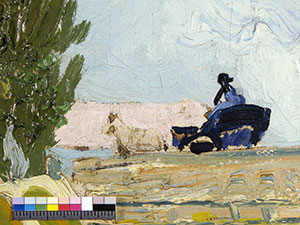 Detail of the horse-drawn carriage, brown India ink drawing
visible in the absence of overpainting 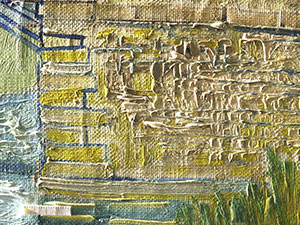 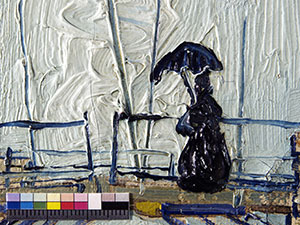 Detail of woman with parasol, heavy impasto and scratches in the fresh paint, presumably applied with the brush ferrule at the same time as the paint 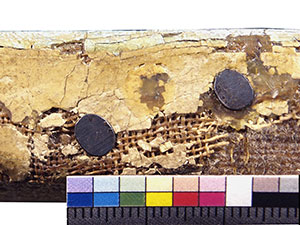 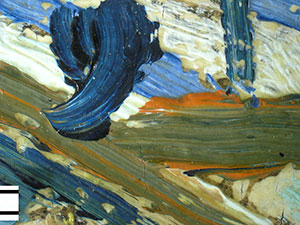 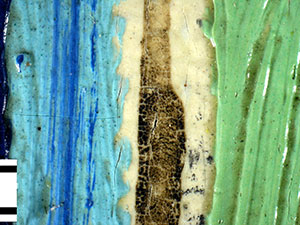 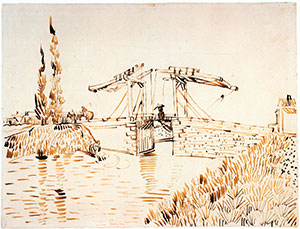 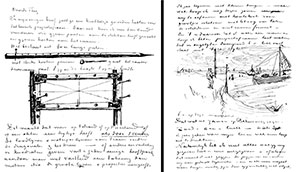